This article has been featured on the frontpage of Hacker News, the follow-up discussion is interesting to read.

Recently, I've come across a not so efficient implementation of a isEven function (from r/programminghorror).

The code is in C++, but the essence of the algorithm is an iterative ascent to the input number from base case 0 (which is even), switching the boolean result at each iteration. It works, but you get a linear time \(O(n)\) isEven function compared to the obvious constant time \(O(1)\) modulo algorithm.

Surprisingly, Clang/LLVM is able to optimize the iterative algorithm down to the constant time algorithm (GCC fails on this one). In Clang 10 with full optimizations, this code compiles down to:

The first instruction is a boolean AND with 1 to keep only the least significant bit (a very fast way to compute a modulo %2), and the second instruction compares the result with 0.

I've decided to explore how Clang was able to do this. As you may know, an optimizer like LLVM (Clang backend) is designed with a bunch of specific passes which transform the code (in the form of LLVM IR) into another (preferably more optimized) code, keeping the same semantic. LLVM has a around 50 different optimization passes, each one targets a specific code pattern. When you give a specific optimization level to your compiler (such as -O2), there is a fixed list of optimization passes which will be executed on your code to optimize it (the list has already been defined for you by the compiler writers)1.

Clang compiles the C++ isEven function to straightforward assembly (in the form of LLVM IR) if you don't apply any optimization passes (-O0).

LLVM IR is a form of low-level (close to the machine) intermediate representation, with the particularity of being in Single Static Assignement form (SSA). Each instruction is always producing a new value (looking like %3), and not reassigning a previous one.

A graphical version of the same IR is called a Control Flow Graph (CFG), it is a graph between vertices called basic block (sequence of instructions which are always executed entirely from top to bottom) and edges which represent a possible flow for our program. For our code, the CFG looks like this: 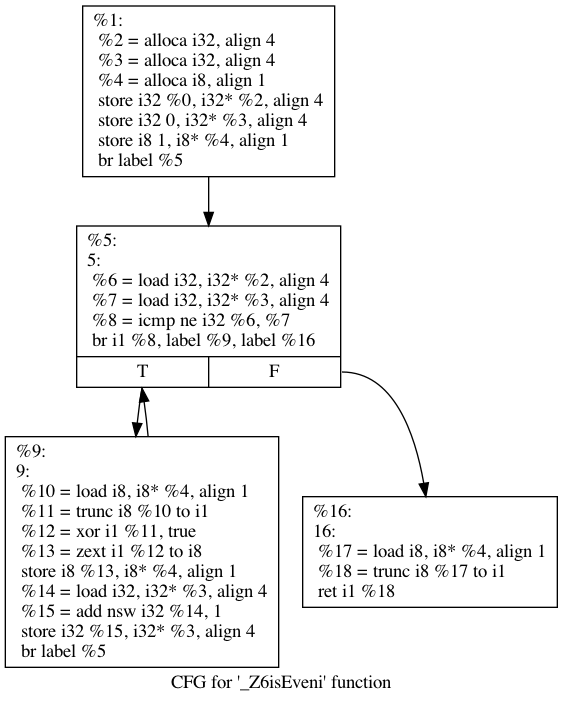 At this point, the code is simply an assembly SSA version of our original C++ code. Let's run some LLVM optimization passes on it to see how it evolves.

The first pass we run is called Memory to Register (mem2reg): its goal is to move variables from memory (in RAM) to abstract registers2 (directly inside the CPU) to make it way faster (memory latency is ~100ns). 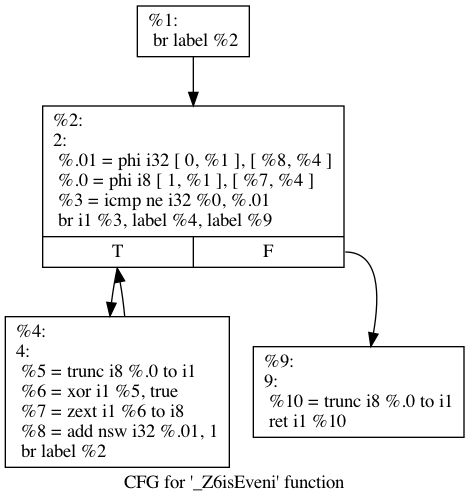 We see that all the instructions related to memory (alloca, load, store) have been removed by the optimizer and now all operations (add, xor) are done directly on CPU registers.

The 4 blocks are still there, but slighty different (they are looking way closer to the original C++ code):

This pass combines several instructions into a simpler/faster one, for example, 2 consecutive additions on the same variable can be reduced to a single one ; or a multiply by 8 can be changed to a left shift by 3, etc… 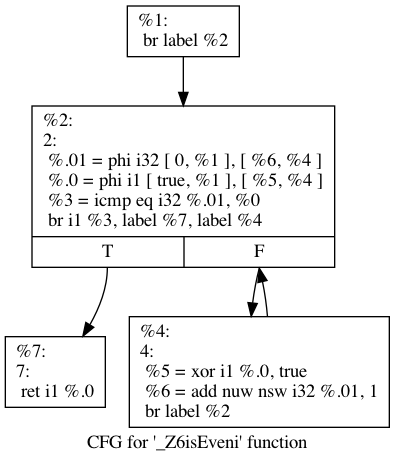 On our code, several changes has been made by this pass:

The next pass we will apply is the Canonicalize Induction Variables pass. This is the "magical" pass which completely removes our loop and thus turns the algorithm into constant time. The LLVM documentation explains:

Because it now only operates on a single bit value (thus having a maximum of 1), LLVM realizes here that our algorithm is a direct mathematical function of the loop count number and of the initial value: 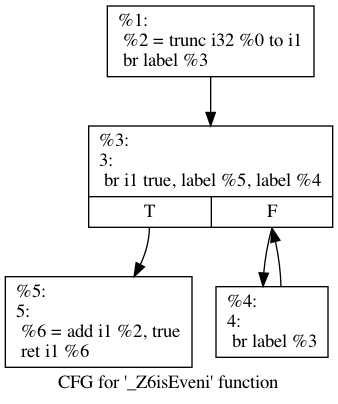 We run the pass -simplifycfg on the previous code, to remove any useless branching. After a final instruction combine pass, we obtain the fully optimized \(O(1)\) complexity code.

Clang is also able to constantize the recursive linear time version of this algorithm! Finding the various optimization passes to produce the end result is left as an exercise to the reader 👨‍🏫.